All Collections
Product Updates
What's the deal behind normalizing and blending data?

What's the deal behind normalizing and blending data?

It's a buzzword we've all heard, but what does it mean... Written for marketers, no data analyst title required

Written by Margo Cleveland
Updated over a week ago

Each ad network has their own specific way of doing things. From measurement to setup process.

For example, we all know LinkedIn adds campaign groups as a top layer, rather than having ad groups. And how could I not mention that Facebook's 'ad groups' are actually labeled 'ad sets'.

Each network has their own custom ways to do things, and it's no different with their set of metrics.

Normalizing or blending data is taking data from multiple sources, and combining it in a way that can be compared apples to apples. Essentially, the metrics are pretty much the same, each source just labels them something different, so ‘normalizing’ takes those metrics, sifts and sorts them, and combines them into a single metric.

When compiling data across networks, you'll find some metrics that include the same data have different names. Ad spend is a great example. Here's what the different networks call spend:

If you export those different metrics from each network, you'll need to normalize the data to one general 'spend' column to be able to pivot and make charts out of your cross-network data. You can label the normalized metric whatever you'd like, but in this example I've used 'spend'.

How we normalize at AdStage

Here at AdStage we partner with the different search and social channels to build a central hub for your ad data. A major part of this process is blending the data so you can view your cross-channel data all in one view, all in one widget.

Continuing with the example above, AdStage compiles all of the different spend KPIs per channel into one column called 'Spend'. You won't see 'amount spent' for Facebook, nor 'cost' for Google, just Spend for any network. Take a look: 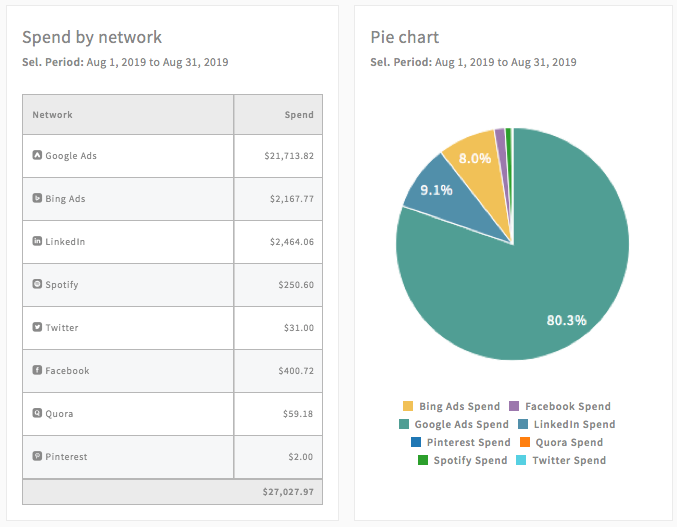 Want to learn more about building a central view for your PPC data? Kick off a trial with AdStage:

Start my free trial!
Did this answer your question?